Spectrum’s RRSH Hot Air Blower has a long history of keeping track switches clear of ice and snow. This economical and durable product was first launched in 1978.

The report was released in November of 1983 and found that only Spectrum’s RRSH passed all of the critical DOT tests.  All other heaters tested allowed switch malfunction/freezing. Switch operation was maintained under all test conditions when the RRSH heater was used and the RRSH was more effective in preventing switch icing and in deicing switches.

Fast forward to 2017 and the early RRSH switch heaters are still in use. CSX alone has upwards of 70 units that were installed in the 1980s.

The superior effectiveness of the RRSH hot air blower allowed major energy economies compared to the other electric heaters tested. Switch icing prevention or deicing could be achieved automatically through Spectrum’s SNDT Snow Detector and Control System by operating the RRSH heaters during icing conditions and not operating them when icing conditions were absent.

The RRSH Hot/Cold Air Blower we sell today can be set to run at half power resulting in 50% energy savings and when used as a cold air blower, there is minimal energy consumption. The blower also offers superior technology in snow detection controls and user-friendly features. 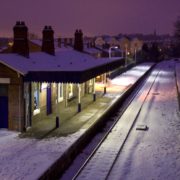 Want to join the discussion?
Feel free to contribute!

5 Ways Winter Attacks Your Railroad And How To Fight Back